The Deutscher Journalisten-Verband (German Federation of Journalists) is the professional association, trade union and service center for journalists.

Below you can find some more detailed information about the DJV in English. You can also download our English brochures. You find them on the right side of this page. If you have any other questions or need further information, please feel free to contact us:

A journalist's profession is a unique profession. For many, it is still a mission rather than a job. The demands on journalists are high, and tend to be increasing in the information society of the 21st century. First and foremost, the opportunities offered by the Internet to obtain global information are nowadays standard. The more information is theoretically available, the more important specialists are, who can select, check, comment upon and enrich this information with background details. The credibility of an information source becomes a decisive criterion. The quality of information determines the confidence of the reader, listener or viewer. And journalists stand for this quality.

Therefore, independent journalism is vital to democratic society. It is the only way to guarantee the provision of liberty of information, and that every citizen can form his or her own opinion, irrespective of individual groups exerting their influence. The majority of the 73,000 journalists in Germany are aware of their responsibility in our society, and therefore contribute significant time and effort.

Journalism requires a high degree of self-reflection and constant self-monitoring. The German Federation of Journalists is the professional association which enables journalists to focus on their profession and become a topic themselves. The DJV creates opportunities for exchange with experienced journalists as well as to meet colleagues from other sectors and fields and to discuss new developments on the media market within journalists' circles. The DJV brings journalists together at national and global meetings, congresses and training events, or in regional and local forums and discussion rounds. In particular, young journalists socialise with elder professional colleagues and get ideas for their work.

Journalists work within certain basic frameworks intended to enable them to work financially independently with a solid training as permanently employed editorial or freelance journalists. The German Federation of Journalists, the trade union for journalists, has been committed to these basic frameworks for more than 60 years. In collective bargaining and media policy, the DJV is committed to, amongst other things, systematic training and regular further education, as well as copyright protection, nowadays, particularly concerning digital implementation. The DJV also calls upon its members to strike should this be necessary to implement social and legal standards. Through the strike fund, it is guaranteed that freelancers can also participate in industrial actions, as potential remuneration losses are compensated.

As a highly specialised trade union exclusively for journalists, the DJV can work and observe developments on-site in the editorial departments, studios and freelancers' studies precisely. The change in the occupational description "journalist" is being attentively monitored.

The number of freelance journalists continues to grow, and obviously, the outsourcing processes at publishers and broadcast stations are not yet concluded. All boundaries between journalism and other fields of communication are blurred in the new tasks associated with online journalism. If there is no longer a clear division between advertising and the editorial section, the role of the journalist would have to be newly defined. This means: Proven journalism, which is vital for the information of society, would no longer exist.

The DJV constantly reminds the public of this significance. The necessary and expedient modernization of the occupational descriptions should retain the journalistic standards, such as independence, accuracy, fairness, and respect for the basic journalistic principles defined in the press code. Journalists must not be restricted by competition on the media market, for example between broadcast stations under private and public law. The liberty of the press, and thus a significant constituent of our democracy, is jeopardized in the medium term if the media only pursue market mechanisms and serve commercial interest.

The DJV is monitoring processes of concentration on the media market particularly critically. The only means of guaranteeing diversity of opinion is via a pluralistic media landscape. Therefore, the DJV insists upon effective monitoring and a limitation of monopolizing in press and broadcasting.

The DJV strives for responsible, credible and independent journalism. Its opinion enjoys permanent media presence and it is the voice of journalism in Germany. The DJV is committed to independently representing the professional and social requirements of its members.

Comprehensive and competent representation: the DJV structure More and more journalists consider the DJV as their lobby. Till now, about 38,000 journalists are members of the DJV. Globally, this makes the DJV one of the largest national journalists' trade unions. It is one of the oldest and most important institutions of the International Federation of Journalists (IFJ), which represents almost 600,000 journalists in over 100 countries. The recognition of its achievements encourages the DJV to offer a more efficient on-site presence, provide optimal service and to continue in its commitment to independent journalism. Routine business is determined by the seven members Federal Executive Council which cooperates closely with the DJV Federal Branch Office. An active professional association and an assertive trade union live from their members. Without their commitment, it would not be possible for the DJV to achieve political success or provide practical support. Therefore, interested members are active in all DJV boards and thus organize association activity.

- The IFJ does not subscribe to any given political viewpoint, but promotes human rights, democracy and pluralism.

- The IFJ is opposed to discrimination of all kinds and condemns the use of media as propaganda or to promote intolerance and conflict.

-  The IFJ believes in freedom of political and cultural expression and defends trade union and other basic human rights.

- The IFJ is the organisation that speaks for journalists within the United Nations system and within the international trade union movement.

- The IFJ supports journalists and their unions whenever they are fighting for their industrial and professional rights and has established an International Safety Fund to provide humanitarian aid for journalists in need.

-  IFJ policy is decided by the Congress which meets every three years and work is carried out by the Secretariat based in Brussels under the direction of an elected Executive Committee. The last - Congress was held in Cádiz on May 25 to May 28,  2010.

In Germany journalism is a free profession. Therefore the vocational training of a journalist is not regulated by law and it is not subject to the German Vocational Training Law. Working as a journalist in Germany is not dependent on an examination or any other tests.

The majority of German journalists gain their vocational training in a publishing company by a so-called Volontariat (more than an internship). This is an in-house training scheme which is regulated by a collective agreement for the German newspapers and magazines. It is similar in public and private broadcasting and press agencies. At the end of the Volontariat the journalist can begin his career as an editor in print or electronic media. But not every Volontariat deserves its name. The DJV informs young journalists about the criteria of a good and widely accepted Volontariat and tells them what to pay attention to. Some young people choose a different way to become journalists. They graduate in journalism or have their vocational training at a private journalism school.

IFJGlobal
The latest IFJ in the news is out! 🗞️ Thank you for your trust and for following our work 🙌👇https://t.co/x6tp5dbc7X
IFJGlobal
In a four-day visit supported by our @uniontounion project, we visited three cities meeting with journalists and u… https://t.co/MezaWEiIdu
IFJGlobal
#Serbia🇷🇸: On 30 November journalists from across the country will converge on the Palace of Serbia to back union c… https://t.co/eX1ng7eKpB 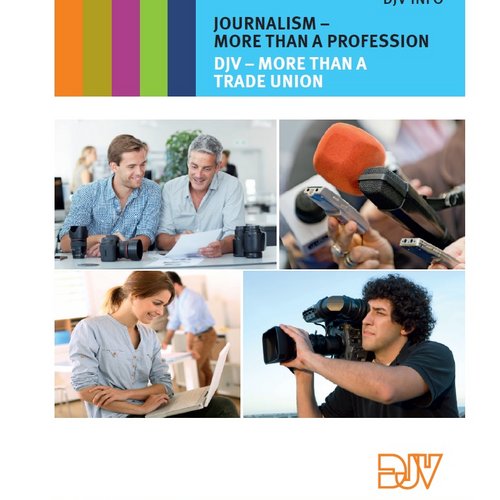 The DJV ist more than a trade union! Download the flyer with basic information about the German Federation of Journalists.